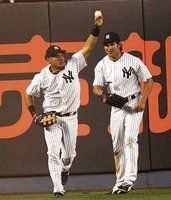 I am so mad at the Red Sox right now, I’m shaking.

Its not a rare occasion for me to be upset with my favorite baseball team, especially since we’re talking about Boston. They’re the kings of disappointment, of letdown, of frustration. They have a long and sordid history, including an 86-year championship drought, of driving their fans absolutely insane.

But this time, I just can’t believe them. I’m beyond mad, past angry, leapt right over enraged. I don’t even have words to describe the extreme, intense, fiery, passionate IRE at the Sox.

Here’s a team that has been overperforming all season long. With a team full of new faces, including a completely revamped infield, not many people expected much from Boston. This was looking to be a rebuilding year while the team learned to play together, management found the necessary missing pieces of the puzzle, players regained their prior All Star form.

But, to the surprise of many, Boston hit the ground running and has been in first place in the AL East for a majority of the season. The team clicked immediately and have looked like they’ve been playing together for years, not months. Aging vets found their Fountain of Youth in Fenway, putting up career stats. New pitchers proving they're ready for the Big Time. And the sun shone down upon Boston.

But as is usually the case in the life of a baseball fan, the question isn’t so much “What have you done?” as much as “What have you done for me lately?” And in the case of the Red Sox, the answer is nothing much besides give me a raging case of heartburn.

Let’s set the stage: Boston’s rival, the New York Yankees, is more banged up than my neighbor's '69 Dodge Dart, relying on a slew of minor-league callups and ineffective veteran signings to fill the holes in their lineup. Sheffield, Matsui, Posada, Damon, Jeter and others have all spent time on the pine this season due to injuries.

Yet somehow, the Yankees stayed in the race, thanks to both the elevated play of their fill-ins, and Boston’s inability to deliver a knockout blow. Despite Boston’s hot start, they’ve hit some rough patches along the way. Toronto owns us. Wells is on the DL for the second time this season. Clement is proving to be ineffective once again. And beyond Timlin (injured), Foulke (injured), and Papelbon, our bullpen is a constantly-rotating collection of AAA callups.

All this equates to a mere half-game lead over the Yanks heading into this weeks four-game series. A lead, mind you, that everyone, EVERYONE, expected the Red Sox to increase. The Yanks are hurt. They’re struggling. Two of their big boppers are down, their bullpen is atrocious, and starting pitching is spotty. The Red Sox were slotted to take advantage of the black-and-blue Yankees, pound out at least three wins in the series, and leave New York with a comfortable 2.5-game lead.

Instead, the Sox are now the ones looking up from second place.

After Beckett’s disaster Monday, which must have been the worst start of his career, and last night’s stomach-punch loss, the best Boston can hope for is a split and that meager half-game lead back. No big advantage, no padding their lead, no going into the All Star break feeling good about their position.

So the question is, Why? How? What the hell is going on?

I’ll tell you what’s going on. The Sox are on autopilot right now. They’re just going through the motions against the Yankees. With just as many Yankee All Stars on the DL as on the field, the Sox figured they could coast through New York, take a few games with no problem, and come out the other end smelling like roses.

They couldn’t be more wrong. The Replacement Yankees got something to prove, and they are doing one hell of a job of proving it to the Sox. Meanwhile, the Sox pitching is horrible and batters don’t seem to want to get on base. Red Sox Captain Jason Varitek hasn’t hit the ball hard in weeks, and is facing one of the lowest batting averages in his career. Even Mr. Clutch himself, David Ortiz, seems to be waving at the ball as it goes by him. Guess what, Ortiz: Alex Cora has a better batting average than you. Embarrassed? Good, you should be.

To make matters worse, the Sox were given a GIFT last night in the form of a stellar performance by a rookie starting pitcher. David Pauley gave the Sox six strong innings, against the Yankees in New York nonetheless, and what did the Sox give him in return? One run. One god-damned run. And yes, I can say God Damn because this ain’t radio. (Ten points for whoever identifies that reference.)

Pauley pitched a gem, and should have gotten out of the seventh with no problems. But with two outs and nobody on, a Cairo dribbler snuck under his glove and past Loretta (who was charging and tried to barehand the ball). Two more runners reach, and now we have the bases loaded.

Enter ineffective relief pitcher, Rudy Seanez, who promptly walks Giambi to give the Yanks a 2-1 lead. Thanks Rudy, you may go now.

That’s not even the real kick in the nuts, either. Top of the eighth, Manny Ramirez hits a BOMB to left center for a sure game-tying home run. Out of nowhere, Melky Cabrera, the same Melky Cabrera that flat-out dropped a pop-up earlier this year that opened up the floodgates for a lopsided Sox victory, the same Melky Cabrera that let a liner skip by him in Fenway for extra bases in another Sox win, this little bastard comes flying up the fence, does his best Tori Hunter impression, and pulls Manny’s game-tying home run ball back onto the field for the final out of the inning.

That’s not just a rally-killer, folks. That’s a game-ender.

There’s no two ways about it: the Yankees deserve first place. They wanted it, hungered for it, and played hard enough to earn the right to sit atop the AL East. Boston has dogged it so far against New York, and if they keep it up, will be lucky to hold on to second place over Toronto.

Get your shit in gear, Boston. Start playing ball. Hit the field like you know what the hell you’re doing. Show us some passion, some fire, some desire to be out there representing our great city. You’ve got one of the best fan bases in baseball supporting you, start fucking playing like you deserve it.

The 2004 championship may have earned you some slack for winning another World Series quickly, but it certainly did NOT excuse you from trying.

Now that I’ve thrown some much-deserved praise the Yankees’ way, it’s time to bring them back down the Earth and rip ‘em a new one:

What the hell is up with all the curtain calls the past two games?

Before you get all bent on me about being a poor loser or something, let me say that I’m all for the curtain call. I think it’s a great way to honor a player for an accomplishment or great play, and love to see that player acknowledge the fans cheering for him with a quick visit to the top step of the dugout and a tip of the cap. I was at Fenway for Curt Schilling’s 200th career victory, and not a single person in attendance left until we were able to coax Curt from the locker room after the game with deafening chants of “We want Curt!” The stadium erupted when Schilling popped out from the dugout and gave the crowd a few waves in appreciation. I actually got goosebumps at that moment.

So please excuse me when I cry foul after Yankee fans demand, and players reciprocate, a curtain call after a second-inning home run. That’s not appreciation, that’s gloating. There is no need to call a player to the top step after he hits a home run that early in the game (which didn’t even give them the lead, mind you). In Monday’s blowout, both players to homer in the second inning received curtain calls. Two in one inning! Are you kidding me? The game was already a blowout at that point, that’s just rubbing it in.

Along the lines of inappropriate cheering, how about that near-miss to Manny Ramirez last night? Wang tossed a high-and-tight fastball to Manny, sending him stumbling backwards out of the box.

And the fans went wild.

That near-beaning (at his head, nonetheless) was applauded almost as much as those damn curtain calls. I know these teams have a long, sordid history, but at NO point over the years has it been considered okay to plunk a batter in the head. And these clowns cheer.

You can bet the bank that if such behavior took place in Fenway, if Boston fans applauded when a Yankee almost got laid out by a fastball to the head, sportswriters around the GLOBE would rip the town apart for representing the ugliest side of human nature and fandom. Boston would be disparaged for wishing ill-will as serious as a concussion upon anyone. We would be beasts.

But somehow, its okay for New Yorkers to act like animals. So much for the classy fans and players at Yankee stadium. They can take that misnomer and cram it right up their pinstriped asses.
Posted by just another fan at 10:30 AM 1 comment: