Silva Brothers Fantasy Football finalized its 2008 Draft this past Sunday, paving the road to scheduling matchups and, ultimately, “friendly” rivalries throughout the league. With questionable picks up and down the board (Westbrook at #2?), its time to examine Week 1 matchups.

The Underdogs, rebounding from a dismal 4-9 record in ‘06 to go 9-3-1 last year, are lead by aging veteran quarterback Donovan McNabb. Questions of his durability abound, as well as the heart of the Eagles franchise itself. Though McNabb desperately wants to prove himself out the gates and show fans (and critics) that he’s still a #1 QB threat in the league, the question lingers if he still has the ability to tap the resources of his youth, much less rely on the tools of teammates.

Family Ties, looking to recover from a somber 4-8-1 mark last season, also has questions at the QB role for its first week. However, this is a dilemma most teams would love to face: do you start Seattle’s Matt Hasselbeck and hope the “tight back” that’s kept him out of preseason games is past, or do you go with proven veteran Brett Favre, who dons a new shade of green this year? Both QBs come with questions (Hasselbeck’s durability, Favre’s ability to quickly learn the Jets offense), but both are proven on the field and led their team to division pennants last season. A true real-life definition of a win-win situation for Family Ties.

The next big question in this matchup lies at the Wide Receive slot, but only for Family Ties. The sure-handed Chris Chambers (SD) is the safe pick as the #2 receiver, but San Diego is sure to rely more on the legs of LaDainian Tomlinson than the arm (and surgically repaired knee) of Phillip Rivers. It would come as no surprise if Family Ties rolled the dice on Laveranues Coles for the season opener, banking on a career resurgence led by the arm of new QB Brett Favre. An injured Coles put up six touchdowns last season in limited play, two more than a healthy Chambers hauled in for all 16 games.

The Underdogs counter with Santonio Holmes (PIT) as their secondary wideout, who’s always a threat to get behind safeties and score. Facing the slow secondary of Houston, Holmes is all but a lock to find the end zone at some point as he did eight times last season. If Pittsburgh has any trouble establishing its running game, no longer a one-man show behind Willie Parker, Big Ben Roethlisberger might take to the air towards Holmes and veteran WR Hines Ward.

Keeping on the Pittsburgh theme, Family Ties features the Steelers defense that is historically a tough wall to break through. The Houston Texans, Pittsburgh’s visiting opponent in Week 1, doesn’t have a clear-cut #1 running back or wide receiver, making them vulnerable to the Iron Curtain D. Though the Underdogs field the highly-touted Vikings defense, Minnesota takes on a tough Green Bay squad at Lambeau. Expect Pittsburgh to put more points on the board than Minnesota.

Family Ties hold a distinct advantage at the RB position to open the season, sending out LaDainian Tomlinson (facing the Carolina Panthers) against Adrian Petersen (at Green Bay). Though both tough backs that are capable of breaking long runs after initial hits, LT gets the nod as the Chargers make their running game presence known at home.

Though CBS Sports gives the Underdogs the slight edge in this matchup, a few savvy roster moves by Family Ties holds the true outcome for these Week 1 teams.

Other games this week:

C2 at Boystown. This one all lies on the health of C2 QB Peyton Manning (IND). If Manning is close to 100%, he’ll easily surpass Boystown’s Drew Brees (NO) on the stat sheet. However, a weak receiving corps for C2 might spell a season-opening defeat if Reggie Wayne (IND) and Greg Jennings (GB) continue to put up usual career all-pro numbers for Boystown.

Fishheads at Killer B’s. The Killer B’s may have to look to bench QB Jake Delhomme (CAR) to take the starting reigns in Week 1 if Derek Anderson (CLE) isn’t cleared to play from his preseason concussion. Neither is a match for Fishheads QB Tony Romo (DAL), however. But with Fishheads WR Chad Johnson (CIN) nursing a torn labrum in his shoulder, Hines Ward (PIT) may get the starting nod, so don’t chalk up a W just yet.
Posted by just another fan at 2:54 PM 1 comment: 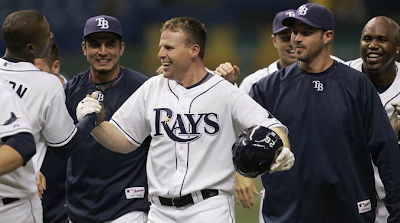 That's all I really need to say here, isn't it? Don't those words alone inspire disbelief and awe in the same breath? Baseball's long-running sad story of futility has been turned on its head this season, and is showing no signs of letting up. Here's a team that no one expected to climb out of the cellar they've grown so accustomed to living in, shooting up the ranks in what has to be the toughest division in baseball to claim first place for a majority of the season. First frickin' place! And they've done it without any semblance of a superstar or grisly veteran to show them the way. Nope, just a great collection of young talent playing as a team. They're the anti-Yankees.

To top it off, despite their historic turnaround, everyone still expected them to falter as the season wore on, especially after they dropped seven games in a row heading into the All Star break. But what did they do after that lull? How about a 24-11 record that turned a half-game deficit into a 4.5 game lead over Boston.

And you can't root against these guys, either. No hot-heads on the squad, no showboaters, no troublemakers (well, maybe Cantu after those cheap shots on Crisp, but a brawl is a brawl). Ownership didn't go out and buy a winning team (which, as the Yankees have shown time and time again, doesn't always work), they stuck with the farm system, brought up good, young talent, made some key acquisitions along the way, and suddenly have a team to be reckoned with.

Even with the recent rash of injuries to key players, they're still winning. Joe Maddon has done an incredible job of coaching the squad and keeping them focused throughout the season. It would be easy for a team of young players like this to let their successes go to their heads, the pressure bog them down, or turn flat when injuries spring up. But they haven't succombed to any such mental ailments, and most of that credit has to go to the skipper. Manger of the year, hands down.

As expected, I'm very torn here. I mean, of COURSE I want the Red Sox to win the division, glide through the playoffs and sweep the World Series for the third time in five years (no, I didn't buy furniture from Jordan's, but I know some that did). But I have to admit, its been alot of fun to see a city at the top of the AL East this late in the season that isn't from New York or Boston. After how many years of those two juggernauts battling it out for the top spot, seeing new, young blood going toe-to-toe with dynasties, and winning, has been one of the best things for baseball since Cal Ripken saved the sport after that devistating strike.

(Did I just admit I'm happy Boston isn't in first place AND praise Cal Ripken in the same paragraph? Someone slap me.)

So, I encourage all baseball fans to sit back and enjoy what's left of the 2008 season, paying particular attention to these Tampa Bay Rays. No matter how far they go in the playoffs, and trust me, it'll be farther than you think, they're fun to watch.

And to think all it took was severing their ties to the Devil.

Side note: The Rays and my Red Sox have an awesome hate-hate relationship going. Started back in 2000 by, who else, Pedro Martinez when he drilled the first batter of the game (Gerald Williams) and started the first of many bench-clearing brawls, the Sox and Rays have had many skirmishes and beanball battles over the years. And its been awesome.

I'm sure its a bit condescending on my part, but the bad blood between these two squads is infinitely different than that the Sox have with the Yankees. Maybe its because the Rays have been the whipping boys of the league for so long and we never really had to take them seriously, or maybe its just because they haven't been around long enough (or, more to the point, been meaningful long enough) to take notice. Whatever the reason, I always get a kick out of these incidents moreso than when the Yankees start something up. 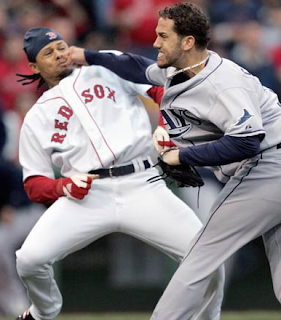 This season had a great brawl early on between Crisp and, well, the entire Rays bench. Crisp had gotten beaned by Shields in retaliation for an incident earlier in the season, and Crisp had enough. He charged the mound, dodged a wicked wild right hook from Shields, and landed a glancing blow before getting tackled and pummeled by the rest of the Rays team. Several great pictures emerged from that brawl, the best of which is seen here.

Despite what it looks like, Crisp actually dodged that punch with some Matrix-esque like moves. One of the best brawls I've seen.
Posted by just another fan at 10:46 AM No comments:

It's pretty sad that I haven't posted anything substantial here in almost a year. The sports world has been overflowing with great stories, huge controversies and amazing events since my last significant post, and I haven't laid one word to paper (or internet, in the case) about ANY of them.

And for that, I apologize.

It's not because I don't feel these events aren't worthy of my time or deserve any sort of coverage (because, you know, this blog is read by thousands of internet visitors a day). There are a thousand different excuses I could throw out there as to why I've been MIA, and none of them can be considered legitimate. So I won't waste your time or mine.

But I do need to post something here. I do need to put some thoughts down, as minuscule and uninspiring as they may be, so I don't "lose it". Just hope I'm not too late.

And, of course, once I started writing this posting, it started taking on a life of its own. Intead of bulleting some ideas just for the sake of getting something up on the site, I'm gonna break it down into separate posts like the topics deserve.
Posted by just another fan at 10:29 AM 1 comment: