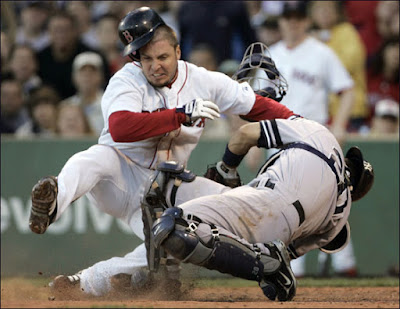 After dropping the final season series against heated rivals from New York, the Sox have little to look back and smile upon outside of their 4.5 game division lead, which, considering how poorly our pitching staff faired over the weekend, looks much smaller than it did a few weeks ago.

Eric Hinske has been the recipient of extended playing time due to Manny's questionable aching side, and has definitely been making the most of his run in the starting lineup. Though the play ended in an out for the Sox, he provided a game-changing spark for the Boston squad when he LEVELED Jorgie Posada in a home plate collision on Saturday. The play, occurring when the score remained close, gave the Sox a much-needed boost, as they went on to win 10-1.

Posada remained in the game, but the effects of Hinske's blow also lingered. On another close play at the plate a few innings later, Posada neglected to tag Jacoby Ellsbury as he slid home, instead flinching as he braced himself for another collision while Ellsbury snuck in to the plate.

The collision was one of those hard-nosed baseball plays you love to see. Hinske, a bear of a man, had no doubt he was going to knock Posada's block off as he barreled toward the plate. A near forearm shiver sent the catcher flying backwards, somehow managing to hold onto the ball. Though Hinske was out, the damage had been done: Posada never looked right after that play, and was pulled from the starting lineup of Sunday's finale.

As good as it was, however, one play doesn't win a season for any team. The Sox are still in complete control of their own destiny, but they certainly aren't about to make it easy for faithful fans. With only 12 games left, the Magic Number remains at 9 for Boston.

The Yankees are looking at a cakewalk of a schedule in their final two weeks, facing Baltimore, Toronto and Tampa Bay. The Sox also face off against the Blue Jays and Devil Rays, but finish up the season with Oakland and Minnesota, two clubs that are always dangerous for teams with playoff hopes.

So while much of the Nation tiptoes the ledge of doom and gloom, there are others that realize the following facts:
But that doesn't mean all is well. There's still work to be done by the Sox, especially once they reach the playoffs. Even with one of the best starting rotations and bullpens in the majors, a recent slump by both needs to be corrected before it gets exploited in a short ALDS series. Outside of Josh Beckett, who posted his league-leading 19th win on Saturday in a battle of Cy Young contenders, other Boston starters have been less than stellar: Dice-K looks tired, Wakefield has had a string of bad starts, and Schilling continues to make fatal mistakes despite brilliant performances.

So enjoy the Sox now, while they're still the best in baseball and continue to manage to keep the Yankees at bay.

Because once the playoffs start, its a whole new ballgame.
Posted by just another fan at 1:31 PM No comments: