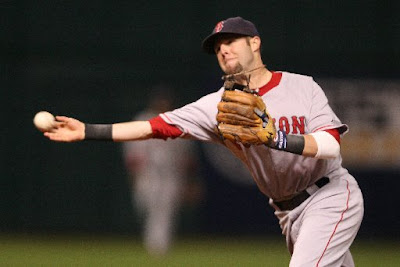 As the baseball season approaches its final week of play, the season-long battles that have raged since April take on a new, heightened fervor across the league. Not only are teams jockeying for playoff positions, home field advantage, and general hot streaks to propel them throughout October, fans and reporters are eyeing the illustrious hardware that accompanies those ballplayers that have stepped up and led their team to the next level.

Once such player is Red Sox second baseman Dustin Pedroia. In only his second full season in the majors, Pedroia has carved out quite a name for himself throughout baseball. His gritty, hard-nosed play on the field is something to be remembered, emulated, glorified. There's yet to be a game where Pedroia doesn't come off the field covered in dirt after pushing himself to the breaking point for his team. He's the consumate Dirt Dog on a team that for years celebrated that style and attitude in many former players.

After swiping the AL Rookie of the Year award last year in dramatic fashion (batting under .200 for the month of April, only to finish well above .300 on the year), capped off by a masterful performance in a four-game sweep of the Colorado Rockies in the World Series, Pedroia didn't miss a beat coming into the 2008 season. Plauged by injuries early in the season, Boston hopped on the back of the short-but-sturdy Pedroia as he carreid them through injuries to big boppers David Ortiz and JD Drew, even taking over the cleanup spot after Manny Ramirez wiggled his way out of the city before the trading deadline.

Pedroia's defense has been nothing but solid since his first day on the field, highlighted by too many game-saving diving stops to count (including one last season that preserved a Clay Buchholz no-hitter).

There is no questioning the desire and determination he brings to the park each and every day. Its readily apparent in his every move; from the monster down-to-one-knee swings he takes at the plate (once thought to be the Achilles Heel for the young talent) to the seeds he tosses from deep behind second base. Paired up with another young Red Sox phenom at shortstop, Jed Lowrie, a prettier double-play combiniation in Boston is hard to imagine.

So, as the season winds down and the Sox prepare for another postseason run, rumblings of "Pedroia for MVP" are beginning to reverberate throughout the cozy confines of Fenway, not to mention the reporters that determine the award's winner. 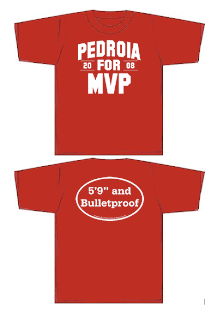 It's no surprise that the city of Boston generates much of the fan promotion for its newest hero, with a constant supply of posters and signs around the park. The latest phase includes custom printed t-shirts proclaiming his candidacy, guaranteed to be seen in droves at ballparks across the country.

But before Red Sox Nation rushes out en masse to purchase said shirt and jump on the MVPedroia bandwagon, take a moment to review the facts as presented by the wearable placard. No, not the "bulletproof" claim, which he has obviously proven time and time again with the way he hurls himself around the field with wreckless abandon.

Look closely. See it? Right there.

I think not. Don't believe the hype, fans, and take a moment to examine the man in action for yourself. If number 15 measures in at 5'9", I'm Bud Selig.

But that just makes his season, and career, even more remarkable: the man's not the slightest tick over 5'8", yet still manages to be a force in the majors. He hangs with the giants of the game and keeps his spot at the top of the heap.

Pedroia for MVP? Absolutely.
Posted by just another fan at 1:32 PM