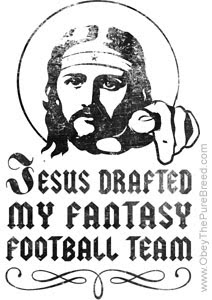 Week 1 of the Silva Brothers Fantasy Football provided plenty of drama amongst the matchups, many of which had nothing to do with the injury to Patriots QB Tom Brady. From the 46-point Boystown blowout of C2 to the horrific 43-40 limp-wristed slapfight between Fishheads and Killer B’s, roster deficiencies were highlighted in many teams (prompting large bids for mediocre players on the free agent list).

Now that the opening salvo in on the books, its time to look ahead to Week 2 and see which teams can bounce back and those that will continue their winning ways.

Dunder Mifflin at Family Ties. Coming off a tough Week 1 six-point loss to Underdogs, Family Ties takes on the high-scoring Dunder Mifflin team that put up impressive numbers in their opening win against the Ambulance Chasers. Dunder Mifflin’s crew was solid across the board (Cleveland WR Braylon Edwards the only player unable to log points), while Family Ties was handcuffed by poor outings from key RB and WR positions.

Dunder Mifflin’s QB Jon Kitna (DET) takes the field against the Green Bay Packers this week, and will look to go to the air early and often in the absence of a running game. Kitna is capable of putting up big numbers, especially at home in the dome, and is a sure bet to find WR Calvin Johnson in the end zone for a strike or two.

Family Ties counters with Brett Favre (NYJ), but face yet another quandary: Start Favre against a tough New England defense that needs to up its game in order to compensate for the loss of QB Tom Brady, or go with injured Seattle QB Matt Hasselbeck, who could have a field day with San Francisco despite the loss of his four top receivers? Last week showed that Favre is far from done and can still sling with the best of them, but also revealed that the Jets front line is far from secure. The Patriots could send him scrambling enough to shut down his high-flying attack. If Hasselbeck is healthy, Family Ties could start him instead and hope for a big day at home for the Seahawks.

At Running Back, both teams are headed for a long day of little production. Dunder Mifflin’s Brian Westbrook (PHI) goes up against a strong Dallas defense, while Family Ties’ LaDainian Tomlinson (SD) battles turf toe in Denver. If LT can bounce back from a disappointing Week 1 and overcome foot issues on the soft grass of Mile High Stadium (and a weak Denver D), Family Ties gets the nod as Dallas easily keeps Westbrook under the 100-yard mark and out of the end zone.

Dunder Mifflin definitely has the advantage in the Wide Receive slots, with Calvin Johnson (DET) hauling in passes from Kitna. Though most Fantasy Owners stay away from QB/WR combos on the same team, Kitna has few other options against Green Bay, so expect Johnson to have a big day with a couple visits to the Promised Land. Family Ties may be able to keep up if Anquan Boldin (ARI) gets some looks over teammate Larry Fitzgerald, especially against a weak Miami secondary.

Both team defenses face strong challenges, but Family Ties takes the advantage here, fielding the tough Pittsburgh D at home against division rivals Cleveland Browns. The Steelers always dial up the intensity for this inter-division clash, and will limit the Browns in the air and on the ground. Dunder Mifflin hopes the Packers defense can contain Kitna and the Lions in Detroit, but as mentioned earlier, Calvin Johnson WILL get in the end zone a couple of times.

In the end, the Quarterbacks will determine the winner of this game. If Kitna gets up and over Green Bay’s defense, Dunder Mifflin will easily take home a Week 2 win. Family Ties can only hope whichever QB they put on the starting roster will have the better day, and pray that the Packers keep Kitna contained.

Other games this week:

Fishheads at Ambulance Chasers. All signs point to the Fishheads rebounding from an abysmal Week 1 and taking the victory behind QB Tony Romo (DAL). Ambulance Chasers can keep it close with Dallas D and if they swap out TE Heath Miller (PIT) for Dallas Clark (IND), but it won’t be enough.

Allocators at C2. The Allocators are weak at the QB position, fielding Kurt Warner (ARI) against C2’s Peyton Manning (IND), who looks to have a payback week after an opening day loss. If Allocators go with Chicago RB Matt Forte, who could run wild in Carolina, instead of the banged-up Joseph Addai (IND), who’s questionable after a head injury and facing a tough Minnesota defense, they could keep it close. But give the win to C2 behind Manning and TE Jason Witten (DAL).

Killer B’s at Boystown. This might be the closest matchup on the schedule this week, and come down to Defenses. Killer B’s QB Jay Cutler (DEN) is no match for Boystown’s Drew Brees (NO), but a tandem RB punch of Julius Jones (SEA), taking on the 49ers, and Steven Jackson (STL) will devastate Boystown’s Willie Parker (PIT) and Jamal Lewis (CLE). Though Boystown fields the Bears D against Carolina, Killer B’s Ravens defense could pull in some points in Houston.
Posted by just another fan at 10:50 AM